China in 3 Slices and 8 Great Regions


China today is divided into 3 Slices (piàn 片), Nord Slice, South Slice and West Slice. They are in turn subdivided into in all 8 great geographical and economical regions. 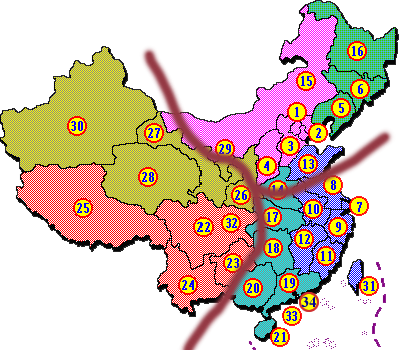 Today, the country is cut in the following order:

The County has appeared during the period of 'Feighting Kindoms' near 475 - 221 Av.-J.C., the key Epoch for the Chinese Nation when Confucius taught his lessons at the end of the Zhou dynasty.

The governor of a county is also the smallest grade in a national competition, classified as 7th level in the chinese mandarin system, called Sesam Mandarin for his small administrative surface, 七品芝麻官.

Add URL |
328 Google reviews - Write a review on Google
No any user feedback.