♥ Here will come your ideal lovers according to your birthday. So please enter immediately this date in the above form... Here is an example graying result: 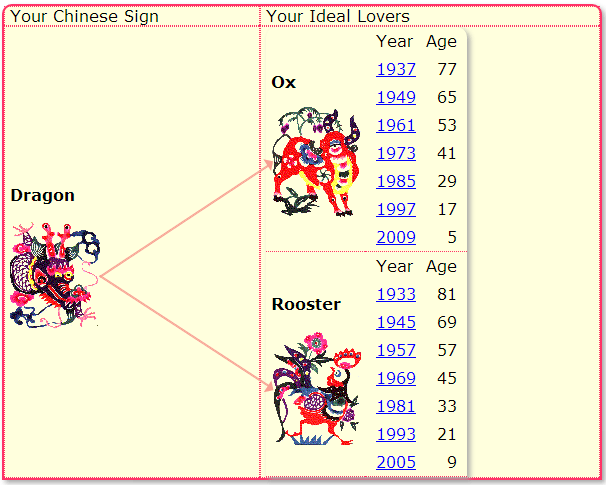 It's proposed 7 potential fiancés per compatible chinese animal with the birth year and the corresponding ages.

Once you clicked on the button [Love Arrows], the PDF button on the toolbar at the right border of the browser's window will allow you to save your best loves in a PDF file, or to print the content of the consultation.

If you don't see love arrows traced, it's the fact that your browser is out of date, please update it to the last version.

When a man and a woman meet, in fact it's like two Chinese signs intersecting. The cross members are sometimes compatible to form a sustainable and fertile pair, sometimes unfortunately incompatible. This page provides further evidence for your married life.

When you point your mouse on an animal, the love flashes are dynamically plotted for the sign. Besides, you could consult the demonstrating video here.

If ever the table is too complex with arrows in all directions, you can click on an animal to isolate.

List of the Chinese Zodiac Signs according to the years

In effect, in the Chinese Horoscope, The Zodiac Signs are annual, that are represented by 12 animals. And each 12 years make a complet set of chinese zodiac cycle. Each animal is a member of the Dizhi (地支), or the Earth Branches:

According to your birthdate and birthplace, your personal portrait can be plotted. So we can decribe your life way, here the so called "Life Book".

We don't take into account the time difference of the timezone of your birthplace compared to the Beijing timezone (CUT+8 or GMT+8), we have an accuracy of 24 hours at the maximum.

Here is a list of Chinese Sign and dates of Chinese Nea Year in the nearest years.

One can find the first citation of the 12 Chinese zodiac signs in the ancient book 《Book of Songs, Shijing, 诗经》 on 1000 BC..

The entropologues attribute these signs to the animalism: the worship of animals.

It was once the Yellow Emperor selects 12 animals to be custodians of the palace. The cat says to the rat to register him as a candidate. Unfortunately, the rat has forgotten, the cat has never been chosen, since then the cat and rat become enemies.

Among the candidates there is the elephant. With its small size, the rat has entered the trunk of the elephant, the elephant ran as soon. Among the remaining animals, they first chose the buffalo as their leader.

The rat is very intelligent, he climbs on the back of the buffalo, the pig is also cons, then the rat was placed first, while the pig is the last.

The white rabbit does not accept this arrangement, he claims a race with the dragon. In the end result, he is plced before the dragon.

Then the dog does not accept the result, in a fit of rage, he bit the white rabbit. As a punishment, it is placed before the last.

The snake, horse, goat, monkey and rooster were engaged in combat as one by one, each has earned its place as the result. Finally we reached the classification of the 12 zodiacal animals of the Chinese Zodiac Signs.