Wiki
Here will come your Chinese Caps: Chinese Age, Chinese Birthday Date, Calculation of your Chinese Age: Year 2023. Then quickly enter your date of birth in the Gregorian calendar above... Here is an example result: 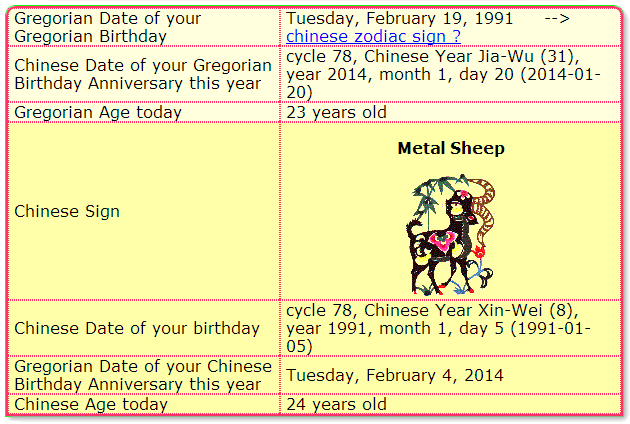 Amusing: Chinese Caps of a Country/Territory

You can get your birthday date, that of your spouse, those of your children or of any date in the Chinese Lunar Calendar for any given date in the Gregorian Calendar. Alternatif subject: Gregorian Caps

The Chinese count the age starting from the birth, every Chinese lunar year which you will traverse count for one year more however your month of birth.

In the final analysis, you will always have a year even 2 years more in Chinese age in Chinese lunar calendar than your Gregorian age in solar calendar.

What is the Chinese Lunar Calendar ?

The Chinese Calendar is a solilunar calendar. It integrates as well the revolution of the Earth around the Sun as the movement of the Moon around the Earth.

A month begins at the day of the new moon (invisible Moon) and ends at the day before the next new moon. The full moon is either on 15 or 16 of the month.

A Chinese year can have 12 or 13 lunar months, that correspond to the nomber of new moons between two successive winter solstices. The year is appelé leap year if there are 13 months in the year.

If a Chinese year always starts on the 1st month 1, the date marking the beginning of the Chinese New Year in the Gregorian calendar is variable between January and March according to relative position of the Sun - Moon.

Here is the Chinese Calendar of my maternal grand father.

Year in the Chinese Lunar Calendar

A Chinese Year (Suì, 岁) is composed of 4 seasons: Spring, Summer, Autumn and Winter, and sub-divised in 24 Chinese Feasts, equivalent to the 24 Chinese Solar Terms of a Chinese Year. The major solar terms Zhōngqì (中气) are given in boldface, while the minor solar terms Jiéqì (节气) are given in lightface.
As these solar terms are only events of the Sun, no lunar event related feasts, such as Chinese New Year which is the day of the first new Moon (day 1 of month 1 of a Chinese lunar year), Dragon Feast (day 5 of month 5 of a Chinese lunar year), are in the list.

Since the creation of the People's Republic of China on October 1st 1949 by the President MAO Zedong (Mao Tsetong), China has officially adopted the Gregorian calendar, or the solar calendar for the administration purpose. Nevertheless, the Chinese People keep their traditional feasts fixed on the dates of the Chinese Lunar Calendar. These feasts are very vivid today such as the Spring Festivities, symbol of the arrival of the Chinese New Year.

The Spring Festival takes place always on the first day of the first month on the Chinese Lunar Calendar. But the date on the solar calendar varies with the year. Il is always on January or February of the current year on the solar calendar, but its date can be obtained only by a very complex calculation of the dual movement of the Earth and of the Moon.

In the Ancient Chinese History of 24 dynasties, the time has neither beginning, nor ending. Each dynasty hopes an infinite reign on time and each emperor starts counting by his first year of reign as year 1. For example, the Emperor KangXi of the Qing Dynasty counts his reign by KangXi year 1, KangXi year 2, KangXi year 3, ...

Nowadays, the Chinese have officially the Gregorian year. This is to say, the year 2023 for this year. But as the Yellow Emperor (Huangdi) is considered as the Creator of the Chinese Nation, the population count also as Huangdi 4721 for this year.

To know more about chinese feasts of the 4 seasons related to the chinese calendar, the chinese lunar calendar of my grand father

would be a precious help.

Add URL |
328 Google reviews - Write a review on Google
773. Visitor *.*.57.* - 2023-02-04 07:49:53
A cryptocurrency is a digital or virtual currency that is secured by cryptography, which makes it nearly impossible to counterfeit or double-spend.
772. Visitor *.*.91.* - 2023-02-03 07:20:26
SaFuu is an acronym for “Sustainable Asset Fund for Universal Users. The $SAFUU Protocol token has now been sacrificed for the native $SFX Blockchain token. The SafuuX Blockchain MainNet Launch is scheduled for Jan 20 2023.
771. Visitor *.*.91.* - 2023-02-03 07:20:03
BitMart is a company that delivers a global digital asset trading platform which provides real-time trading services including Bitcoin (BTC), Ethereum (ETH) and Tether (USDT) trading. Its diversified system functions include spot trading, futures contract trading, and over-the-counter trading. The company states that its trading system has a robust security mechanism and reliable underlying architecture, which provides investors with dependable trading experience.
770. Visitor *.*.91.* - 2023-02-03 07:19:38
A safe crypto wallet for digital tokens & NFTs. Join the blockchain and DeFi world. Download the most loved wallet. Multiple browsers and operating systems supported. MetaMask is a popular cryptocurrency wallet that supports a broad range of Ethereum-based tokens and non-fungible tokens (NFTs) on supported blockchains.
769. Visitor *.*.57.* - 2023-02-03 07:02:47
Coinbase Sign in to continue our investments in our compliance program. Our goal has always been and will always be to build the most trusted, compliant, and secure crypto exchange in the world.